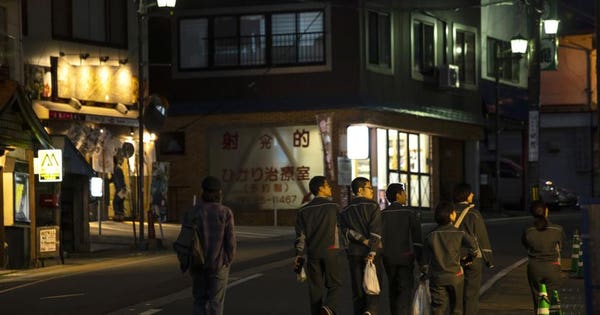 Pedestrians walk along a street at night in Yuzawa, Niigata Prefecture. For Japan’s growing flood of foreign tourists, one of the top internet search terms is “onsen,” the traditional hot springs where travelers have soaked since the days of the samurai. Now some of the world’s oldest businesses are attracting big new money. Photographer: Shiho Fukada/Bloomberg Photo credit: © 2019 Bloomberg Finance LP

We’ve all done it. You go online to look at a pattern, a photo, and next thing you know you are buying a half dozen cheese plates even though you aren’t French and you don’t eat cheese. We were told in the 1990s that the internet was the information highway and today we see that it is clearly the service road straight to capitalist heaven. For many of us, myself included, who doesn’t enjoy having object clicked, purchased and shipped to our doors? The internet has allowed us to short-circuit time and distance such that we inevitably get online and presume that we have power over this information network rather than accept that opposite might be true—that it has enormous power over us.

Among all the actions that the internet saves us time and money in doing, we invariably find ourselves wrapped out with choice. It starts with watching a YouTube video linked from a news item and hours later you are watching Carol Burnett on Dick Cavett from the 1970s. And you are very restrained if you stop your viewing there!  And things go far worse when undertaking a hobby or home restoration.  Indeed, the internet is a goldmine for those who are disciplined enough to use it for the panoply of networks, savings and knowledge it offers. We can find the latest in new tech and car finance news and we can search for an apartment with specific square footage and geographical range. You can even transfer one car lease for another with services like Swapalease.com and myriad other sites that enable people to precise their lifestyle and financial needs. Conversely, the internet is a virtual opium den for the many who start off looking for a recipe and end up purchasing thousands of dollars of items like the many who have a compulsive buying disorder among other negative repercussions resulting from extended internet usage.

Many recall how the internet was supposed to be this “information superhighway,” a term used throughout the 1990s to refer to the web. Yet, is not one supposed to be moving, traveling on a highway? Paradoxically the internet has accommodated travel companies since its inception with Travelweb.com being the first online travel site in 1994 followed by Viator Systems (now Viator) in 1995 and then the following year, Expedia. Today there are thousands of online sites for searching travel accommodations, flights and even Airbnb experiences. There is no shortage of companies which have formed along the information highway whose function is expressly to set people into motion, traveling in real life. As new startups like GlobalGrasshopper have emerged in recent years, we must wonder if the information highway is less about information and more about the unstoppable stream of offerings that lure the consumer into purchasing vacations or experiences such as dressing up as a mermaid or making smudge sticks with a “real witch.” (I don’t know what a fake witch looks like.)

From material goods to travel plans, we exist within a cultural enigma where so much of our lives takes place through the information superhighway only to find that the paths of intellectual and social travel tend to lead towards consumerism on the one hand, and then real-life experiences of actual travel on the other. Both have their benefits and deficits, but what strikes me about the information highway of intellectual travel is that we are often propelled into real travel and interactions. And this is the conundrum of a medium which has so divided us physically while intellectually uniting us. Certainly, any force online which propels the individual to get up and away from the computer and step into the real world can only be good for our society which increasing moves towards the atomization of the individual. Ultimately, there is a paradox on how the internet was sold as a “highway” when in reality it forces most to physically stagnate while may businesses are busy promoting “movement” through consumption.

For instance, Travelpayouts is an affiliate company where travel brands can monetize their websites by connecting them to a network of global travel partners such as  Kayak.com, Booking.com and Viator.com. Surveys show that 80% of people are using the internet to book their travels. For the busy individual with no time to plan a vacation, online travel sites like this allow people to expand their real lives through experiences abroad. In fact, more and more people are traveling solo with travel companies targeting this market online. As more and more people use commercial sites to read reviews of services before booking vacations in addition to online forums, we are seeing how the real world of travel is being directly affected by the online world of marketing and chat forums.

On the other side of this coin, more and more people are “traveling” without leaving their chairs, in much the same way that the origins of anthropology in the late19th century began through what is commonly referred to as “armchair anthropology”: White men like James Frazer and E.B. Tylor would write about cultures they had never stepped foot in after taking a glimpse at travel photography and publications like the early editions of National Geographic in order to write prose around people they would never meet. In many respects, online travel culture replicates this sort of old-world ethos whereby individuals can talk about political and cultural effects in faraway lands because of reading an article or watching a video on Youtube, often romanticizing and creating a myth out of other regions.

The challenge for our era is to figure out how to get ourselves to other places in an ecologically and politically responsible way whereby traveling might involve a bit of internet searching but ultimately revolves around our traveling with moving.

Twitter’s New Reply-Limiting Feature, All You Need To Know

Amazon Will Spend $4 Billion Or More On Coronavirus Response.

The Top 11 Productivity Apps of 2019 For Entrepreneurs – Forbes

The man who should have taken first step on Moon – and it’s not Buzz...